Things We Do Well

Things we do well

By Deb Niemeier and Elizabeth Honig

As scientists and engineers, we do a lot really well. We build tunnels and roads; we build medical equipment that saves lives. We can decipher your DNA like nobody’s business. We track elusive wildlife and build sensors to monitor literally hundreds of things in the environment. We can write code that turns your house lights on and your city lights off.

The fact is that we are really good at the things in which we’ve been trained. In the right circumstances, we can make a bomb of money off that training. Since our society elevates people who achieve financial success, our ability to make money defines us as being important.

And sometimes all of this makes us think we are fundamentally smarter than everyone else, when in fact, we have achieved success through a narrowly focused, technically based skill. We have little education in the larger context within which our accomplishments have operated, and to be blunt, most of us could not formulate a critical argument about that context. In fact, in spite of our belief that technology will save the world, we are actually quite naïve to the ways in which the world works. As people who have accomplished socially valued things (money-making), we even find ourselves tasked with making decisions that impact larger systems, groups, and polities of which we have very little understanding.

A few extreme examples of this have been in the news lately. Facebook’s Mark Zuckerberg has been under fire for pledging to eliminate “fake news” on Facebook while hedging that Holocaust deniers really mean well. His earlier generous donation of $100 million to New Jersey schools is considered by many to have been a wasted opportunity because – oddly – he didn’t really know how to fix an education system. Meanwhile, Facebook subsidiary WhatsApp is struggling to deal with the fact that dozens of people in India have been murdered based on false rumors spread on their platform. 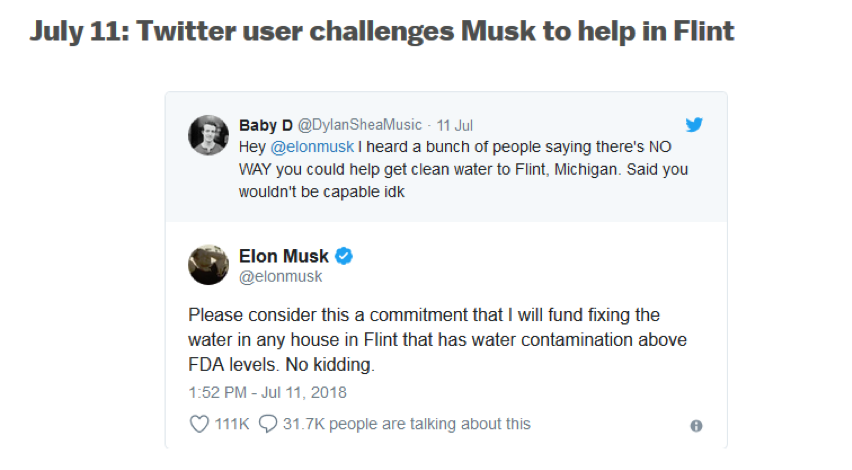 Social media is only one way in which engineers and scientists believe that technology will save the day. Take Elon Musk, founder and CEO of Tesla, SpaceX, and other ventures, the 53d richest person in the world according to Forbes but also, and tellingly,  #21 in their list of the worlds’ most powerful people. He made a high-profile intervention in the Tham Luong cave rescue with a self-invented mini-submarine, followed by an online, name-calling tantrum when his technology was rejected.  In the process of boasting about his brilliance, he claimed he would fix the water in any house in Flint with “water contamination above FDA levels,” although the  FDA has nothing to do with setting water quality standards.

These are instances where a technology (Tesla or facebook) is developed and promoted and, supposedly, overseen to some degree, by people who do not understand the world into which it reaches. Social media is the most egregious of these because its own power – to persuade, to (mis)inform, to divide – is so extreme and carries huge social and political ramifications. People who make vast fortunes through idealistic technological achievements probably shouldn’t be in sole charge of facilitating societal discourse when they have so little grasp of how power actually operates. We not only need a bit of humility, we also need some common sense and friends and advisers in the humanities and social sciences.

The Blog has an Editorial Board responsible for the quality of information and content development.

Women in STEM Database
Subscribe to Our Voices Blog

Kavanaugh Battle Shows the Power, and the Limits, of #MeToo Movement

Truth and Consequences: American Politics After a Year of #MeToo

Why is Trump Off the Hook in MeToo Movement? Because We Let Him Off